Doh! We slept in again, the cycling yesterday really tuckered us out. We were meant to be seeing Fushimi Inari this morning but we've missed the early morning start that we wanted and it's raining.

The only thing we had booked today was Samurai Kembu at 5pm so we had a little bit of time to do something else. We found a website advertising tea ceremonies and Ben rang them on Skype to book, unfortunately they only had the 4pm slot available which would be tight to get to the Samurai performance. Ben insisted it was doable and so he booked it and we headed off towards Gion so we could get our shrine book stamped at Yakusa (which we'd previously visited at night) on the way.

Since it is the weekend there were a lot more crowds from local tourists, we also saw lots of Japanese women (and the occasional boyfriend/husband) dressed up in pretty Yukata walking around.

The tea ceremony was at a place called Camellia that was in a really interesting area, it was a shame we were in a hurry as we would have liked to look around more.

This shop was selling a variety of tea flavoured ice creams.

There were some quite high-end shops in this area, but they were all either built inside an existing building, or had been styled to blend in with the existing architecture. Ben spotted a camouflaged Starbucks.

We did stop off at a very colourful shrine and had our book stamped.

We found the Camellia building down a side-street.

The tea ceremony was with a group of people, 3 from South America and 2 others from England/Poland. The shop was small and cosy with 2 rooms upstairs for performing the ceremonies. I initially tried to sit on tatami floor but after the explanation my legs were hurting and so I had to give in and sit on the bench provided. Two of the others joined me (Ben was already on the bench) and we laughed about the amount of walking we had all done.

The ceremony itself was quite short but very interesting to watch. The host ritually cleans the equipment with a handkerchief that symbolises her being the host. Carefully ladels water with a bamboo ladel and scoops matcha powder into the cup.

The cups have a right side (the best side) which faces outward when you drink and we all got to have a go at whisking our own matcha with a bamboo whisk. They also gave us a sweet made of agar with a slightly crisp coating and a sliver of yuzu fruit peel.

After the tea ceremony we had to powerwalk/run to the samurai show, this was difficult as it was pouring with rain and very busy. Luckily we made it just in time for the show.

The theatre was down some steps and underneath a shop, we were given a history of the Samurai and then shown different styles of Kembu dances.

After the show we were given tabi socks to put on and shown how to use a katana. The moves were very similar to karate-do which helped with our form, except the sword was quite heavy and made your arms hurt after a while.

We then got dressed into samurai clothing and shown how to use a fan for acting, like showing the weather, the sunrise or shooting a bow and arrow.
We then learnt a short performance which we then performed on our own in front of the others - although at this point it was only myself, Ben and another man along with the instructor. It was really great fun and we were very glad that we made it in time.

Back out into the rain to find dinner, I ate a dish called yakisoba - fried soba noodles with an omelette on top. It felt like a dish you'd have for a hangover cure or the Japanese equivalent of a dirty kebab. It was very tasty but unfortunately it started a night of pain. Ben ate okonomiyaki, a pancake made with everything.

We didn't do much else after that since I was beginning to not feel very well and we planned to go to Fushimi Inari in the early morning (since we didn't go this morning). So we went back to the hotel to sleep. 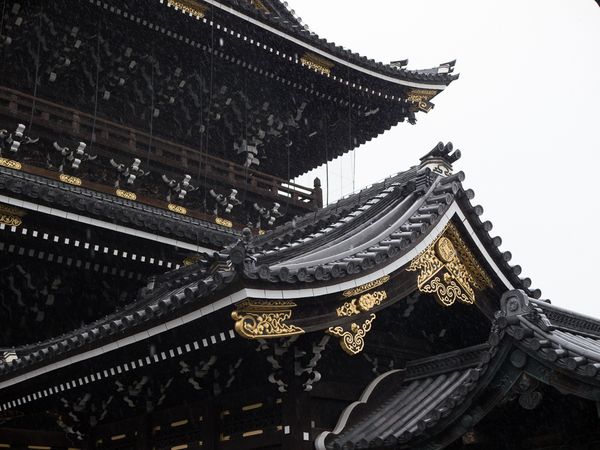 It's raining again so we visit Higashi Honganji and watch some traditional Japanese performances. 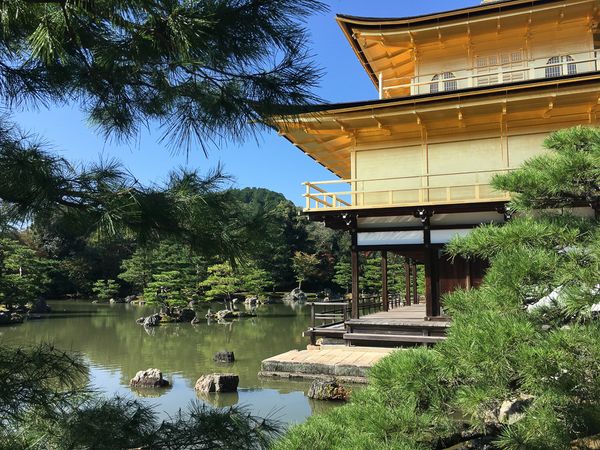