Today is our first full day in Tokyo, except the jetlag hit us hard and we slept in until 1pm! So after finally rolling out of bed we headed out towards Kaminarimon, the outer gate leading to Senso-ji temple.

The day before we had met a rickshaw driver who did his best to persuade us to go on his tour in the pouring rain (from Typhoon No. 21). Today was much nicer weather, glorious sunshine and 21 degrees C, although a bit windy, and so we decided it was a much nicer day for a rickshaw tour.

Our guide was called Yuta (pronounced like the state) and he took us on a 45 minute tour on his rickshaw, showing us the old streets around Asakusa and taking our photo in picturesque locations before dropping us off at Tokyo Skytree.

Tokyo Skytree is the world's second largest tower, the first being the Burj Kalifah. It is 634m tall and you can buy tickets to go up to the viewing decks at 350m and 450m. We bought tickets for both levels, and enjoyed the view over Tokyo.

We had a drink and an icecream from the Skytree Cafe, thinking that 'Lemon Vinegar Drink' was just a bad translation. How wrong we were, it was pleasantly lemon until the vinegar aftertaste hit the back of your throat. The 'Blueberry Vinegar' Ice Cream was much nicer although we aren't sure why.

We then had a great view of the sun setting behind Mt. Fuji-san.

By the time we had finished viewing the scenery it was dinner time and we headed down the tower to the food courts on the first few floors. We ate at Tokyo Champ having Beef Curry with Pork Loin Cutlet which was delicious - I'm getting the hand of chopsticks now.

We then perused the shops and sweet counters which were mostly shutting up shop since it was after 9pm, but we did buy some Banana shaped cakes with hearts on that are Maple and Banana flavour (2 of Ben's favourite things!).

And then we found the ice-cream! I had Almond and Maple, Ben had Blueberry & Kiwi. It was lovely and had little cubes of soft cake at the bottom of the pot and a sesame breadstick?!

Time to go back to the hotel but we had to get a Pasmo card first to easily ride the underground. Pasmo cards appear to be used everywhere to pay for things like we use contactless cards. We've seen Pasmo card readers on the vending machines and at several shops so far. We successfully navigated the underground and walked back via Sensō-ji Temple.

The walk through the temple area was lovely, it wasn't particular busy and everywhere was lit up since it was well past sunset.

We found a wall of little tiny drawers containing paper fortunes - you had to shake a metal container until a wooden stick with a number fell out and this number corresponded to the drawer that contained your fortune. It cost 100yen and seemed to work on an honour system which was nice - you'd have to be pretty dodgy to steal a fortune though.

There is a 24h Don Quixote on the way back from Senso-ji to our hotel and so we stopped in to get a plug adaptor because the ones we had were wrong, doh! And also bought some snacks and had fun looking around at all the strange things for sale - it was basically Poundland on steroids.

Back at the hotel and it's after midnight so really should be off to bed otherwise we'll accidentally sleep in again! 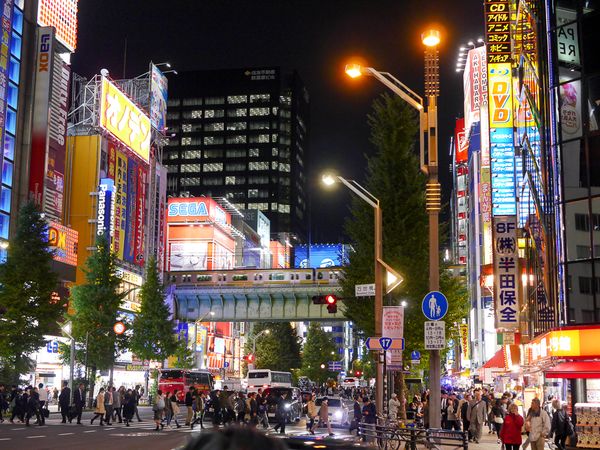 Shopping in Asakusa and the bright lights of Akihabara

I don't believe the one bag lifestyle is suitable for everyone. It really depends on what you prefer do on your holibobs. If your idea of a great holiday is a nice all inclusive resort and a week relaxing on the beach then you