Today was our second day at Tokyo DisneySea! (First day was here)

Our main aim for today was to get on all the rides we didn't get on yesterday. Of those, the Indiana Jones Adventure was the one we most wanted to try so we headed straight there as soon as we got into the park.

Of course, we weren't the only ones, and the queue was already really long.

The ride was great though. We were loaded into a jeep which barrelled its way through a temple with rickety bridges, blow-dart corridors and giant flame-spitting skulls!

Next on our list was the newest ride in the park (at the time), Nemo & Friends' SeaRider. This was a simulator ride like Star Tours where we were shrunk down to fish-size for a tour around the oceans with Nemo.

Just next-door we went on Aquatopia where these hovercraft-like bumper cars scoot & spin around a shallow lake.

One of the fun things about the Tokyo Disney parks is that it's really common for groups of friends or families to dress up for the occasion in matching outfits, or matching Disney accessories.

We saw loads of people doing this around the park, and most of them were Duffy Bear or ShellieMay themed since those characters were originally unique to Tokyo DisneySea.

Next, we got on board the Electric Railway to take us back towards the New York port area.

From the railway, we got a great view of the themed buildings in New York Harbour

We skipped the Tower of Terror ride, since it wasn't one that Alyssa would have enjoyed.

Once we were off the Electric Railway, we were next to the SS Columbia which was staging a show staring Duffy Bear & friends.

After our first day, we had a better sense of where things were in the park, so we were doing a lot more zig-zagging between different areas as we tried to best use our FastPasses.

We stopped for a bit to check out the Disney S.E.A. (Society of Explorers & Adventurers) Fortress and the self-guided Fortress Explorations

The introduction to Fortress Explorations was via ghost Leonardo da Vinci in a magical mirror, but this was only in Japanese, so we didn't really have a solid grasp of the plot; but we could certainly follow pictographs and arrows!

The fortress is a great space to explore, it's got loads of staircases and cubby-holes with different sights and architecture.

We wandered around to find the different rooms and objects which matched up to the symbols and then solved some simple puzzles at each location.

At the end, we keyed in our answers and presented our map to ghost Leonardo again which rewarded us with.. averting the eruption of the volcano and saving the town! Hooray!

We'd grabbed FastPasses for Indiana Jones' Adventure when we rode it the first time, and we went back for another ride.

By the time we came out, it was getting dark again, and DisneySea really does look fantastic at night.

We were feeling pretty pleased with our time in DisneySea; we'd managed to go on almost every 'big' ride in the park, and several of our favourites more than once.

One ride we hadn't been on yet was Toy Story Mania so we headed towards that area of the park.

Unfortunately when we got there, the queues were just as long in the evening as they had been all day; so we decided to give it a miss (rather than spend our last few hours in a queue)

On the plus side, we tried on some more hats, and Alyssa bought an awesome Toy Story hoody.

We went with the flow of the crowd back to the front of the park for the evening fireworks show.

And with that, it was the end of our last day in Japan! Our wonderful holiday was almost over, and tomorrow morning we'd be catching our flight home. 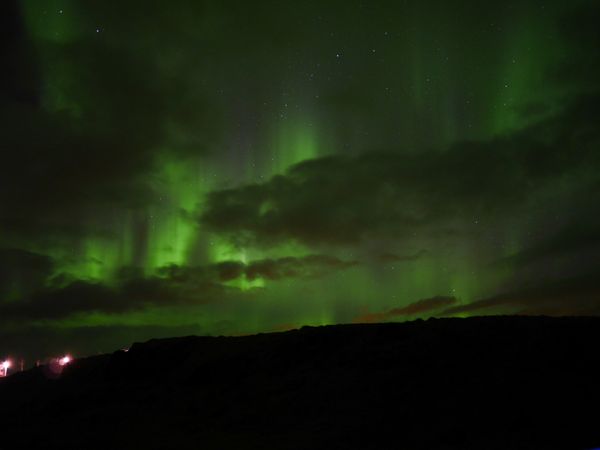 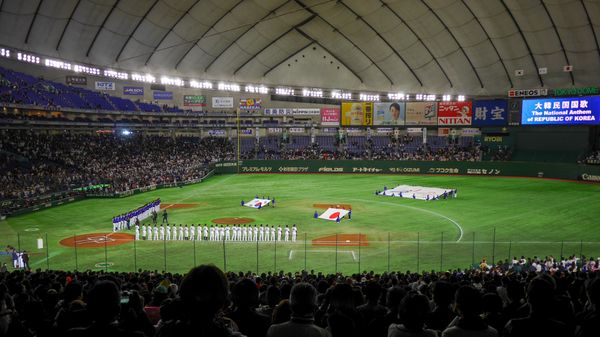 We watch a baseball match at Tokyo Dome; Japan vs. South Korea.