We had an early start today since we wanted to attend the Buddhist morning prayers at 6:30am followed by the Fire Ceremony at 7am. It was so cold, 4 degrees celsius and the temple has lots of doors open to the outside so I regretted only putting on 1 pair of socks when I got up.

The morning prayers lasted for 30 minutes and involved two monks chanting, ringing some cymbal-like things and hitting a large bowl that resonated around the room.

After the prayers we had to go outside the temple gate and a few metres down the road to the adjoining temple building hat hosted the fire ceremony. This was a lot busier than the prayers and I didn't manage to get a very good 'seat' so I couldn't see what the monk was doing.

One of the monks started drumming while the monk performing the ceremony began to chant. He slowly built up a small fire in a cauldron and then began burning a pile of thin wooden blocks called votives. Each votive had someone's wish written on it.

Once all the votives had been burnt, the monk let the fire die down and then invited us all to draw nearer and breathe in the smoke with its purported healing powers. I decided not to deliberately breathe in the smoke but I did join everyone else in paying respect to the 3 statues of Buddha at the back of the room as we left the temple.

Back in our room at 7:30am meant we could relax a bit so I wrote some more blog and then Ben did some photo editing. Check-out was at 10am so we waited until the last moment to check out, pay for the tour the previous night and get our shrine book stamped/signed.

The Ekoin monastery is quite large and had many different windows looking out onto different courtyard gardens, or different views of the surroundings. The light was very nice this early.

We headed out for another walk through Okunoin cemetery in the daylight.

The trees in the cemetery are enormous (Lyssa for scale).

At the far-end of the cemetery, back in the temple, we saw the hall of lanterns which can only be described as like the Department of Mysteries from Harry Potter. Rows upon rows of lanterns, each honouring a person who has passed away, lined the ceiling and on racks which had just enough room to walk between.

We also took some more photos of interesting things in the cemetery that were too hard to capture during the night tour.

In the daylight, we could also see the little piles of balanced stones that were dotted all over.

We arrived back at the temple just after 12pm and starting the drive to Shirahama. This was a very windy road going down the other side of Koya-san and we stopped at some roadside view points to take photos and admire the view of the valley.

The drive was fairly simple and we only went wrong near the end when we went to fill up the tank before handing the car back. Japanese petrol stations have attendants so he filled it up and he had a cash box built in to the pumps so we paid with cash. He also gave us a receipt which we needed to give to the hire car people to prove we put the correct fuel in.

Times Car Rental Shirahama was only 5 minutes down the road, it was a much smaller branch and appeared to only have the 1 car, so we squished ourselves on the drive behind it. The young man checked the car over and we grabbed our bags and crossed the road to Shirahama Train Station. The guard asked us where we were going and luckily there was a Shinkansen train sitting at the first platform, leaving in just 10 minutes, that would stop where we wanted it to.

At this point I contacted Hideo, our AirBNB host in Tanabe to say we would be arriving at Kii-Tanabe soon. Hideo came and picked us up from outside the station and drove us to his house while pointing out local landmarks and chatting.

Hideo showed us to our room which was very large. He said the house belonged to his father, but he now lives in a nursing home. He gave us a tour of the house, but we were there for so little time we weren't able to use the kitchen or dining room, or even see any of the other occupants. After the tour he gave us a lift into town so we could book accommodation in Chikatsuyu-Oji and bade us farewell as he probably wouldn't see us in the morning.

To book our accomodation we went to the Kumano Travel office in Tanabe. Kumano Travel is a service that provides bookings and reservations for people travelling on the Kumano Kodo at the many small guesthouses or minshiku along the trail.

The ladies behind the desk were incredibly helpful. They had to ring 6 different guesthouses until we found one that wasn't already fully-booked. We would be spending the next night at Minshuku Nakano. We also booked the luggage shuttle so we wouldn't have to carry our heavy backpacks while walking the trail. This is a service that transports your backpacks from one guesthouse to the next while you're hiking during the day.

I was really hungry at this point and not feeling great, we hadn't had a proper meal all day and I was quite dehydrated. We had curry over rice which was ok but had a lot of gristly meat in it so we both just ate the rice with the sauce.

Hideo had shown us a 24hr supermarket during his tour and this was our next stop as we needed to get snacks and water. We bought some ready-made sandwiches with no crust that had been sealed like a bread ravioli, in chocolate spread and strawberry jam flavours. We also picked up jelly sweets, cereal bars and one of Ben's favourites, Pringles.

When we got back to Hideo's I basically went straight to bed at 7:30pm because I was so tired and slept most of the night until the alarm went at 7am. I still felt tired and not like I'd had almost 12 hours sleep. 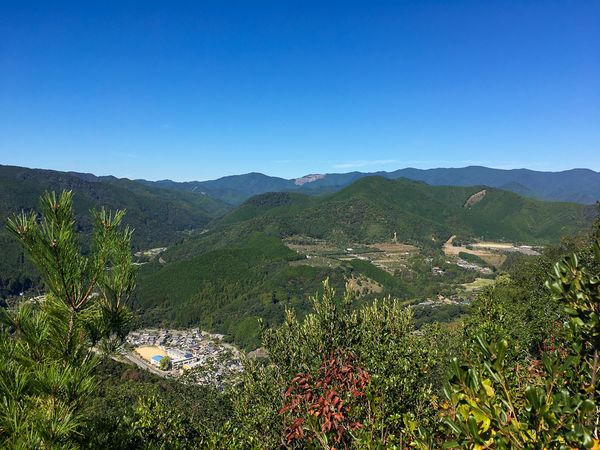 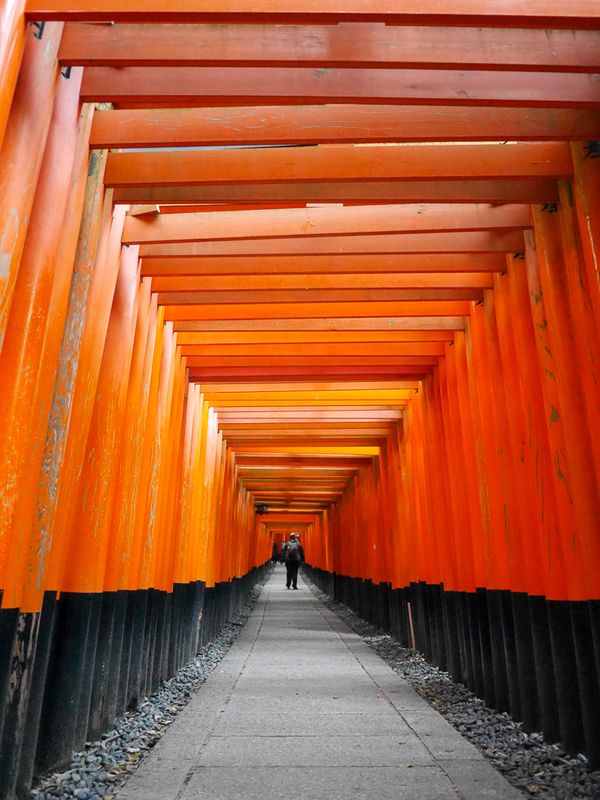 We get up early to climb Fushimi Inari and hire a car to travel from Kyoto to Koya-san.