This morning we got up at 6am to walk the Fushimi Inari trail, our hotel is only round the corner so we didn't have to rely on public transport and would beat the crowds.

Fushimi Inari Taisha is one of the most popular attractions in Kyoto famous for the thousands of vermillion torii gates that line the trail up to the summit of the mountain. Each gate has been donated to bring the patron good luck and so many companies have bought torii gates so that their company may prosper.

Inari is the spirit of rice, fertility, tea and sake; and uses white foxes as their messenger. The stone foxes were everywhere, some holding a key or jewel in their mouth, most of them were wearing a vermillion cloth tied around their necks.

It was very peaceful in the morning, the only other people around were photographers and other keen sightseers which made the walk very pleasant. The further up the mountainside you go the fewer people are around so Ben got plenty of photo opportunities.

The walk takes around 2-3 hours depending on your fitness level since there are a lot of stairs, the trail also undulates so you go up and down a lot on the journey to the top. The majority of the trail is a circuit around the mountain and most people go the same way although you do run in to some people doing the opposite.

The trail was gorgeous and it just got sunnier as we walked. We finally made it to the top, gave a donation to the shrine and prayed as we had been taught by Ross during our bike tour. There were several ladies dressed in white already there, praying and chanting, their voices were beautiful.

Going back down was a lot quicker, although you begin to realise it uses totally different muscles in your legs.

At the bottom of the mountain, the shrine offices had opened and so we had our shrine book stamped/signed and bought 2 small souvenirs, a keyring and a pin, showing a fox and the red torii gates.

Our next booked accommodation is on Koya-san, at a Buddhist temple called Eko-in. We had originally planned to go straight there on the train but after Ben's crown on his front tooth fell off we were off to an international dentist. We did try a normal Japanese dentist and Ben had an entertaining hand waving conversation since the receptionists didn't speak English and Ben doesn't speak Japanese. Google Translate works wonders and we've found you can usually get your point across with mime.

The appointment for the international dentist was at 12pm and we took a taxi to the place (Nakai Dental Clinic on Teramachi Dori) because the station was really busy and we had all our bags. It was a really modern looking dentist office and the staff spoke wonderful English. The dentist did some great work and now Ben has a protected and non-chipped front tooth that he feels much better about.

Koya-san (being a lot of temples up a mountain) is relatively isolated and the trip there would involve several different trains and buses. However, we'd also found out that some of those train routes were damaged by the typhoon and now had replacement bus services in the middle, meaning even more changes and waiting at bus stops.

Since the trip to the dentist meant that we were going to be leaving Kyoto a lot later than planned, we decided to scrap the train & bus idea and drive ourselves there directly. Equipped with our International Driving License, we hopped on the subway and headed to Kyoto station to find a car rental place.

The first shop we went to didn't have any cars available on such short notice, but the second shop, Times Car Rental, let us have a lime green Toyota Aqua Hybrid and we set off to Koya-san at around 3:30.

This photo isn't it, but it looked the same.

Hilarity ensues as we don't know how to drive an automatic. Ben keeps accidentally doing emergency stops when he tries to use the clutch, the windscreen wiper controls are where the indicators normally are, and the car keeps talking to us in Japanese. After a few false starts, we make it out of the car park and we're off.

We smoothly cruised along the toll roads and climbed twisting roads up the mountainside until we reached Ekoin at Koya-san just before 7pm.

A monk with an electronic earpiece greeted us, took our names and radioed ahead to say we had arrived. He asked if we wanted dinner (yes), and did we want to do the night time cemetery tour of Okunoin (yes). The tour started at 7:15 so he quickly showed us to our room where another monk was already setting out our vegetarian dinner. We ate as many of the things that we recognised as we could before having to run down to do the tour.

Though the tour was run by the monks of Ekoin temple, people staying at other temples could attend as well, so there were a lot of people waiting in the car park. The monks split us into 2 groups depending on which temples you were staying at. Our group got to go first with the second following behind by a few minutes.

Koya is a small town that is 2km x 3km with a large cemetery at one end that is 1.6km long. The tour was very enjoyable and culminated in the tomb of Kobo Daishi - a buddhist monk who is said to be in a state of eternal meditation. The monks on Mt. Koya take him food twice daily and only the highest monk is allowed to enter the tomb.

When we got back to our room we did some Facetiming with parents to talk about the day we had and tried to get an early night as we had Buddhist Meditation at 6:30 in the morning.

Early morning prayers with the monks at Ekoin, and our drive to Tanabe. 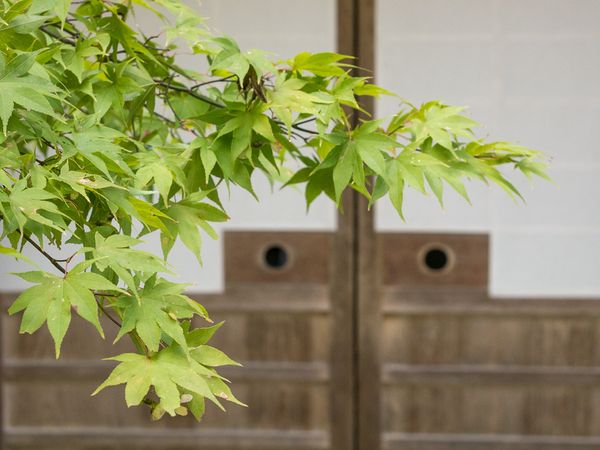 We renew our vows in a shinto ceremony, visit the bamboo grove, and watch an excellent evening show.